Glow for Myton is back – and it’s bigger and better than ever before.

To mark The Myton Hospices’ 40th birthday, we are going all out to offer our amazing supporters the most fabulous night of fun and fundraising.

On the night of Saturday, April 2, Coventry City Centre will come alive with colour as hundreds of fundraisers, dressed head-to-toe in neon, will step up for the cause and walk, jog, dance or run their way around the 5k route.

We promised bigger and better – and that is exactly what participants will get every step of the way – with three awesome Glow Zones, including the return of the bubble and foam tunnels, a Zumba warm-up courtesy, once more, of Matt Print and the ever-amazing paint throw just ahead of the event start.

A top DJ will also be on-hand to add some musical marvel to proceedings and the entire event will have a retro 80s theme in recognition of the decade Myton first opened its doors to care for people living with terminal illnesses, and their families, across Coventry and Warwickshire.

We want to raise £40,000 in sponsorship to mark our 40th birthday – money which will help ensure Myton can continue to provide its services, free of charge, to our patients and their families when they need us most.

Take advantage of our Early Bird Discount and register by Tuesday 1st March you will pay just £15 to take part in this year’s Glow for Myton!

Registration will cost £20 per person after this date and £30 on the night.

So what do you get for your money?

As well as a great night out in the city, everyone who signs up will get a drawstring bag, Glow for Myton T-shirt, glow sticks and powder paint for the colour throw - and the knowledge you are helping your local charity to continue its vital work in Coventry and Warwickshire!

Starting at University Square, you will set off through the city at 9pm and party your way around the route. Once you return to University Square you can join the after-glow party and dance into the night!

Don’t worry about how quickly you make it around the route as it isn’t a timed event – but if you want to set yourselves a target we are more than happy for you to challenge yourself. This event is one everyone can get involved with; the route is wheelchair friendly, so everyone can soak up the party atmosphere, and it’s all for fun!

Whether you take part in memory of a loved one or just to support Myton, people pledging to raise certain levels of money will also become our Myton Glow Getters and receive additional goodies as listed below:

If you raise £100, you will receive a special Glow Getter T-shirt, some additional Glow merchandise, and start at the front of the pack.

If you raise £250, you will receive all of the above, plus a Myton Water Bottle.

If you raise £500, you will receive all of the above, plus a fabulous Grey Myton Hoodie. 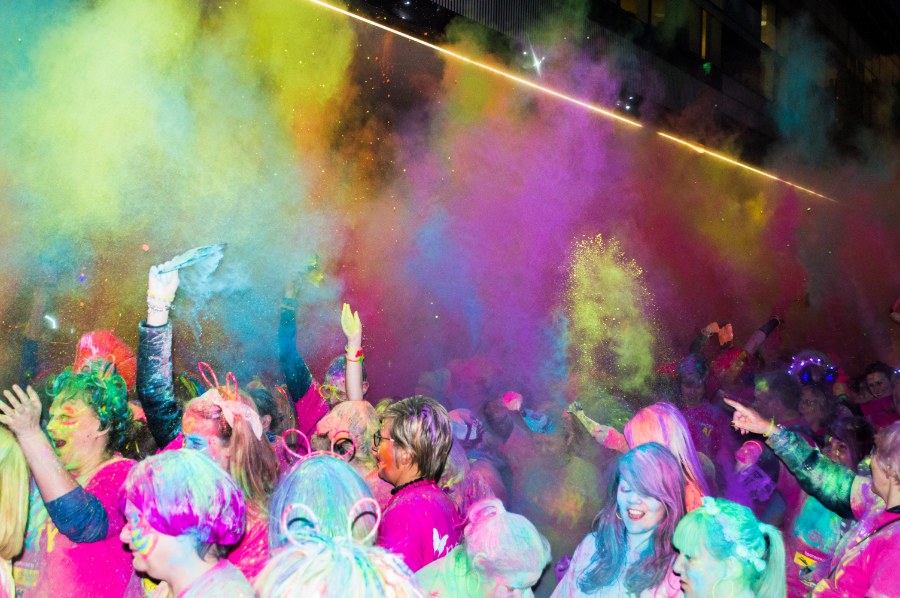 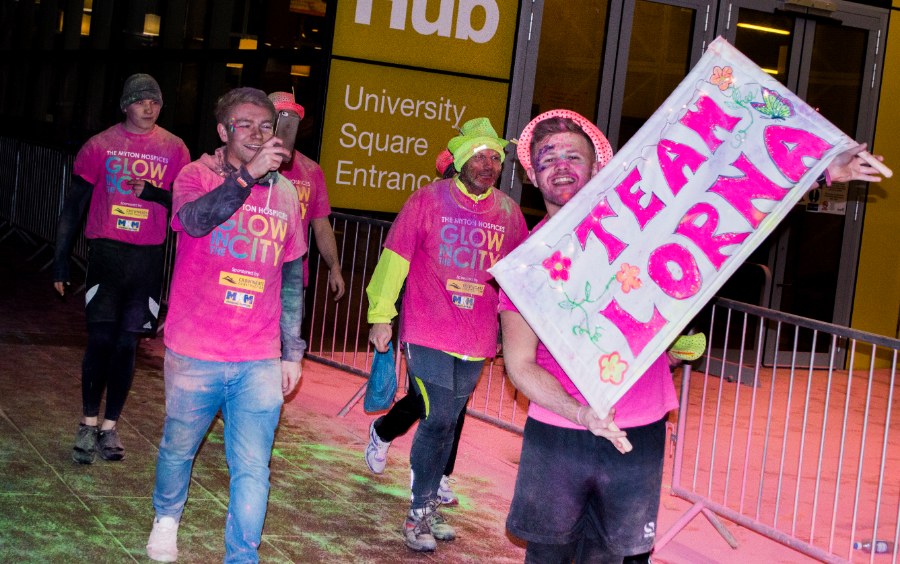 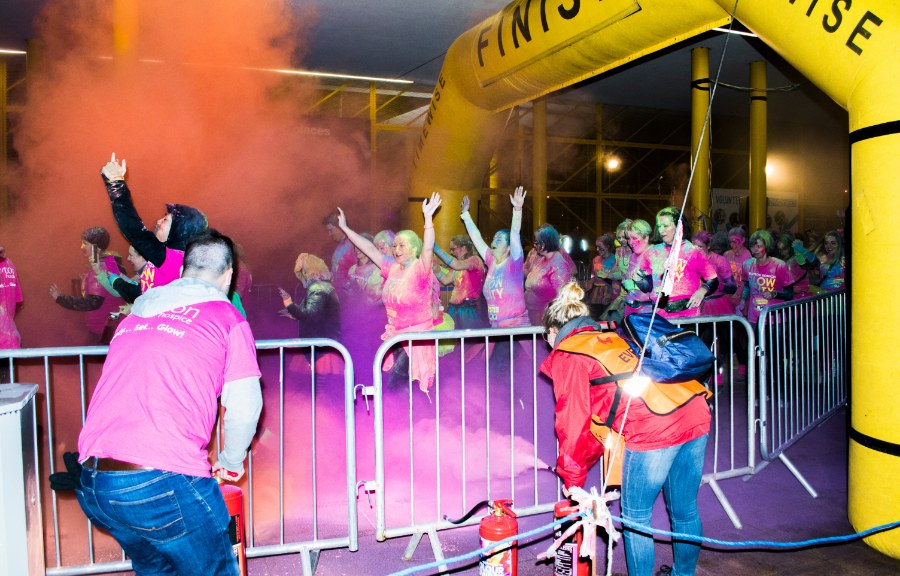 You can walk, jog or dance the 5k route at your own leisure – this event is not a race and you won’t be timed so enjoy yourself!

There are car parks which are just a short walk away from the venue:

Check-in is from 7.30pm at University Square in the red gazebo

If you have already checked-in at the pre check-in event you don’t need to check-in on the night.

We will be organising two pre check-in days so participants can pick up their glow pack in advance of the event; this means you won’t have to check in on the night itself.

We will also be selling some additional merchandise on the night to ensure everyone looks and feels glow-tastic.

They will be at:

There will be portable toilets available in University Square.

There will be a variety of catering stalls in University Square selling delicious food and drinks before and after you make your way around the 5k route!

If you are feeling unwell or need first aid please call the events team mobile: 07599 752835. Warwickshire Ambulance Association will be on hand to deal with any incidents.

Please be aware that the event takes place at night and next to some main roads, so please take care along the route and make sure you are aware of your surroundings.

In the event of an emergency do not hesitate to call 999.

The route is 5k and incorporates Coventry city centre – please see enclosed map. Along the way there will be some exciting glow zones waiting for you! There will be fluorescent signage around the route, along with our lovely volunteer marshals who will be cheering you along! 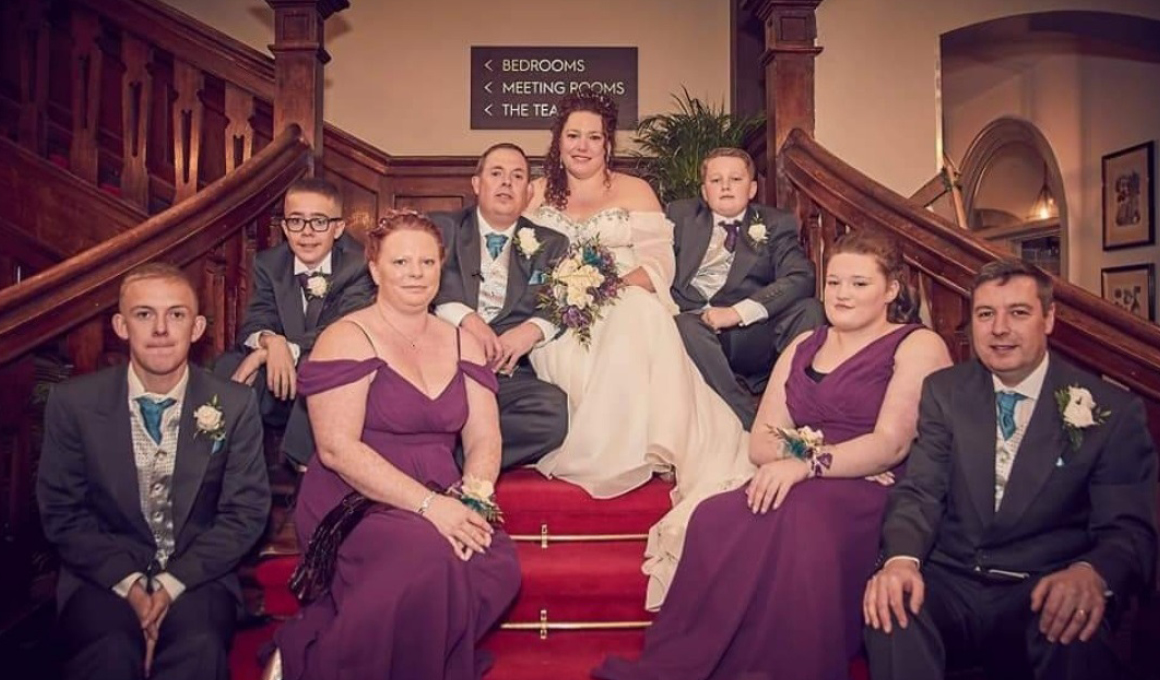 Louise Young was just 47 when she died at Coventry Myton Hospice and her incredible family and friends have donated over £3,500 to Myton in her memory. We are so grateful to them and everyone who donated – thank you from all of us at Myton!

We spoke to Louise’s 16-year-old daughter Jessica and she bravely shared her mum’s story with us. Jessica described how at the end of February 2021 Louise woke up with a sharp pain in her side that got worse and she had an ongoing cough for some time. After a week Louise keeled over in pain and couldn’t walk, doctors thought that she may have fractured a rib and sent her for an X-ray and blood tests. The blood tests showed that Louise was low in Iron and Vitamin D and she was given some medication. Louise wasn’t really eating and stayed overnight in hospital for some scans and checks, she was then discharged but returned to hospital the following Monday and ended up staying for two weeks.

The first week she was being treated for a chest infection and low Iron but a week later a CT scan showed masses on her lungs, kidney and liver. Jessica said her mum was relieved to have an explanation for why she was feeling so unwell and seemed quite positive after being told there was treatment available.

Jessica said that at the start of the week they were expecting her mum to come home at the weekend as she was getting better after her first treatment, but as the week went on she was in a lot of pain and had a high temperature. Louise was admitted to Myton that weekend with the aim of recuperating and getting her strength up.

Whilst Louise was at Myton her family spent every day with her and on the Wednesday Louise’s sister Rachel came to see her, she was advised to stay and on the Thursday Louise was very unwell. Jessica turned 16 on 9th April 2021 and knowing that her mum was unlikely to make it, the nurses at Myton suggested they had an early birthday party for Jessica so that her mum could be there. They arranged a cake, balloons and banners and made the occasion as special as possible for all of the family.

Jessica describes how her mum had jaundice and by the Monday she was extremely yellow and weak, had stopped eating and couldn’t open her eyes or respond. On the morning of Tuesday 30th March 2021 Paul got a call to say that he should come to Myton to be with his wife. He was joined by Rachel and her daughter Georgia, Louise’s niece. Louise’s children Sam and Jessica stayed at home. At 3.55pm that day Louise took her last breath and peacefully passed away, pain-free. That evening the family shared memories about their beloved Louise.

As Covid-19 restrictions were still in place not everyone who wanted to could attend Louise’s funeral but instead they lined the streets to say their goodbyes. Louise was a teaching assistant and head of nurture at Oakfield Primary School in Rugby until she became unwell and on the day of her funeral the children had decorated the fence with poems and pictures for Louise’s final farewell.

The family held a funeral collection for Myton and this was added to with donations from the school and Paul’s employer Cwikskip. The family had previously cleared out Jessica and Sam’s bedrooms at home and sold items on Facebook, the plan was to put the money towards a new kitchen when Louise came home, sadly this wasn’t to be, so Paul, Jessica and Sam decided to donate the money to Myton instead, as well as £1,000 from Louise’s pension as they know this is what she would have wanted.

Jess is going to attend Glow for Myton so you can hear first-hand the difference your sponsorship makes. Every penny raised means we can be there for more people like Louise, Jess, Sam and Paul when they need us most, now and in the future.

We do not suggest a minimum sponsorship amount, we just ask that you raise as much as possible. Your registration fee covers the cost of the event, but it is your sponsorship money which makes the difference to our patients and their families.

To reach our target of £40,000 we rely entirely on you raising sponsorship. Have a look at the difference the money you raise will make:

You can rarely scroll through social media these days without seeing a fundraising page, and that is because it is one of the most effective and easiest ways of encouraging your family, friends and colleagues to sponsor you. By setting up a JustGiving page you can easily share your fundraising efforts and progress on Facebook and Twitter as often as you want to. Having an online fundraising page also means you do not have to physically collect money after the event – it comes straight to us – and Gift Aid is automatically calculated and processed.

Please let us know, by emailing the Events Team, if you set up a Fundraiser on Facebook; we receive limited information from Facebook which makes it extremely hard for us to link the donation to your fundraising otherwise.

These are two words charities love to hear! Many employers offer match funding which means they will match what you have raised (to a certain amount), potentially doubling what you raise for Myton! Why not speak to your employer to find out if this is something they will do?

UK tax payers can raise an additional 25% through Gift Aid at no extra cost to themselves. To ensure we can claim Gift Aid we need the full name, home address and post code of your sponsors – and of course don’t forget to tick the Gift Aid box!

If you are having a spring clean to get rid of unwanted clothes and household goods, why not sell them at a car-boot sale or on eBay to raise sponsorship money? You will get rid of some clutter while raising extra money for Myton! You could also get your friends round for an evening of wine and movies, or some pampering and ask them for a donation in return. With Valentine’s Day, Pancake Day and the start of Lent all happening before Glow for Myton you could unleash your inner Mary Berry with some themed baking to sell to friends, family and work colleagues; indulgent chocolate brownies, fluffy American-style pancakes or even a good old Victoria sponge!

For more information or if you have any problems signing up please call 01926 358382 or email events@mytonhospice.org 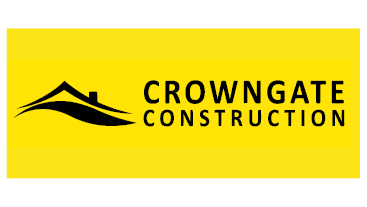