Nigel Fenwick aged worked as a postman in Leamington Spa until he was diagnosed with cancer in January 2021.

Over Christmas 2020 Nigel experienced severe back pain and finally after lots of conversations with his wife went to the doctors in mid-January.

He was sent to Warwick Hospital for an X-ray and within two hours had a call from his doctor to say the X-ray had shown a large mass. A CT scan was arranged and on the morning of the scan when Nigel went to make a cup of tea his leg gave way.

He spent all week having scans and seeing consultants, who told him he had Kidney Cancer but that it was very close to his spine and they wanted to urgently operate to prevent further deterioration. Nigel likened the cancer to Ivy taking hold and spreading and returning even when you cut it back.

By the day of his emergency operation Nigel could only move with the aid of a walking stick, the 12 hour surgery involved putting two 10 inch carbon rods in his back and 100 staples down his spine, and was deemed a success. After a day Nigel was able to stand and began a regimen of exercise, making excellent progress, he was discharged 10 days later and was told to rest for 8 weeks to recover.

The Kidney Cancer had spread to his ribs and spine and a couple of weeks later Nigel experienced his legs and toes freezing, he spent four days in hospital and was then discharged with some exercises to do at home.

This happened again and the third time, on April 12th, Nigel ended up in University Hospitals Coventry and Warwickshire where he became paraplegic and double incontinent.

Nigel describes how he told himself he had two choices; he could moan but it wouldn’t change anything or he could accept that he had limited time to live and get on with it – he chose the latter.

From this point on Nigel used Facebook to raise awareness of how difficult life is for paraplegic people and people with disabilities and to highlight some of the things people take for granted when they are well and able-bodied.

He also decided to raise money for a family he knew from his post round, where one of the children has Angelman Syndrome – a genetic condition that affects the nervous system and cause severe physical and learning disabilities.

When Nigel returned home from hospital district nurses would come in and wash him but he longed for a bath and contacted a number of organisations to see if this could be arranged.

After facing many knock-backs he contacted Warwick Myton Hospice and explained his situation to one of our Myton at Home nurses – “I want to die clean!” he said, and it became the Myton team’s mission to make this happen and facilitate Nigel being able to enjoy a bath.

In September the team arranged for Nigel to come into Warwick Myton Hospice and have his first bath in months, he spent three hours with us relaxing in the specialist bath that nurses hoisted him in and out of.

Nigel returned a couple more times for baths and has since been admitted to Warwick Myton Hospice as an inpatient. Nigel wants to express his gratitude to Myton and let people know the difference this has made to his quality of life. He added that his earlier visits made being admitted onto the ward much easier. 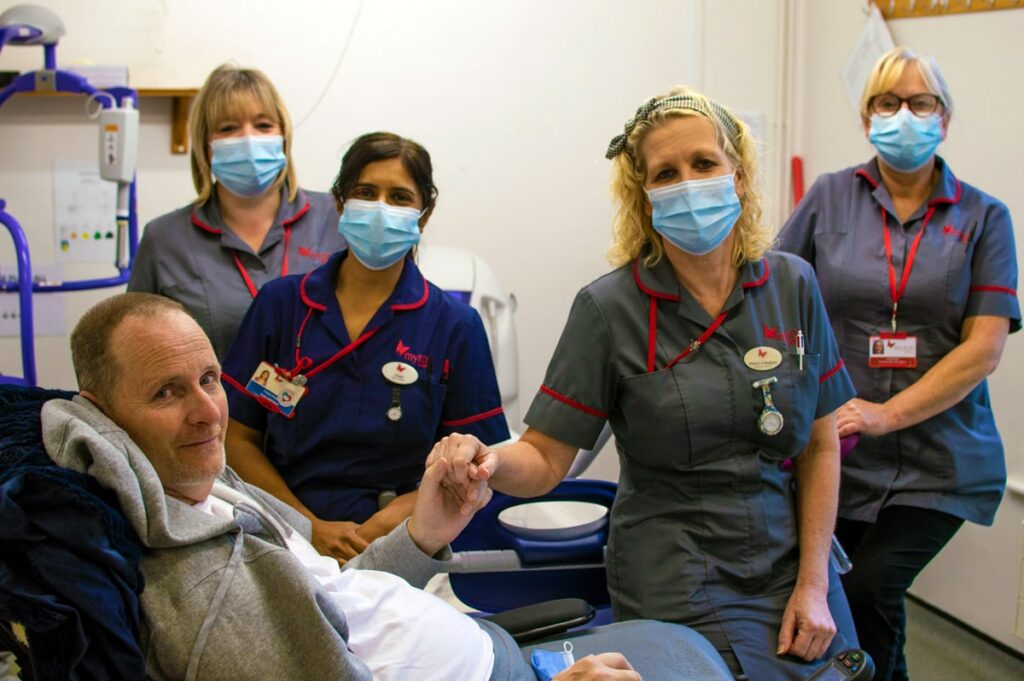